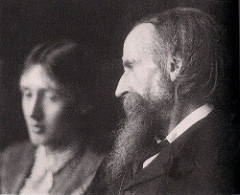 Long before he became famous as the co-founder of the Dictionary of National Biography in 1885 (and as the father of Virginia Woolf and Vanessa Bell), Leslie Stephen (1832-1904) was a teaching fellow at Trinity Hall, Cambridge from 1854 until 1864. During his ten years there, he wrote a series of affectionate and sardonic essays about university life, published anonymously in 1865 in a little book called Sketches From Cambridge by A. Don.

In the first chapter, Stephen describes Trinity Hall as ‘the ideal of a college’, with its ancient cloisters and courts surrounded by tall trees, organ music drifting through the air and the sounds of high-spirited young men making their way to lectures, as they had done for centuries. Now this scholarly idyll was under threat: women were encroaching on its hallowed ground.

We have a lawn of velvet turf, hitherto devoted to the orthodox game of bowls, but threatened by an invasion of croquet, for female influence is slowly but surely invading our cloisters. Whether, like the ivy that gathers upon our ancient walls, it may ultimately be fatal to their stability, remains yet to be seen.

The young Leslie Stephen was far from being a conservative. He argued passionately for university reform, and, unlike most of his fellow academics, he was a strong supporter of Abraham Lincoln during the American Civil War. He was a tall, athletic figure and a keen Alpine mountaineer who once, on a hot day,  walked 50 miles from Cambridge to London for an evening dinner at his club.

In Stephen’s time the University of Cambridge was still an all male institution, as it had been ever since it was founded in 1513. Only a handful of college masters and professors were permitted to marry. Men lived, studied, taught and dined together as celibates in their colleges (in terms of marriage at least – prostitutes were a thriving town business). Stephen claimed that during the fourteen years he spent at Cambridge, first as a student, then a fellow, the only women he spoke to were his bedder (college cleaner) and a handful of masters’ wives.

But now, for the first time, the prospect of women ‘invading’ Cambridge (as many of the dons saw it) was becoming a reality. After the university reforms of the 1850s, colleges were keen to adapt to changing times and to attract the best students and teachers. Separate lectures for women began to be held, and by the late 1860s the first ladies’ colleges at Oxford and Cambridge would be established.

The prospect of female students did not worry Stephen particularly. It was another sort of invasion that he feared: the university wife. This would break up Cambridge’s exclusively male scholarly world and ‘destroy the strong college spirit which formed such a pleasant bond of union; a married fellow will, I fear, oftener think more of his wife than his college’. But the majority of male academics did not want to have to choose between a university career and having a family, and by the 1870s most colleges permitted their fellows to marry.

After resigning his fellowship in 1864 because he refused to accept the university’s stringent religious rules, Leslie Stephen moved to London, began a career as a literary journalist, and married Minny Thackeray. However, he still kept in touch with his Cambridge friends, and later told Richard Claverhouse Jebb that he was glad that the university’s ‘idiotic rule of celibacy’ had been dropped. When he met Jebb’s American wife Caroline in 1874 Stephen liked her immediately, and they formed a lasting friendship, even though one of the first things Caroline did when she moved to her new home in Cambridge was to plan a croquet lawn.

What did she make of Leslie Stephen? In a letter to her sister soon after meeting him Caroline summed him up as one of the men ‘whose regular business, not their genius, lies among books… Such men are in harness because they have not combativeness & destructiveness enough to make their largeness of intellect tell in life.’ It was an astute and insightful assessment, which seemed to foresee some of the unhappiness of Leslie Stephen’s later life. It would have fitted well into the great work of biographical scholarship that dominated his life, now known as the Oxford Dictionary of National Biography.

One thought on “An invasion of croquet”

The Writes of Woman

A celebration of female writers and their work.

"An insatiable passion possesses me, which even today I cannot and would not stop … I never grow tired of books ..." - Francesco Petrarca

The greatest WordPress.com site in all the land!