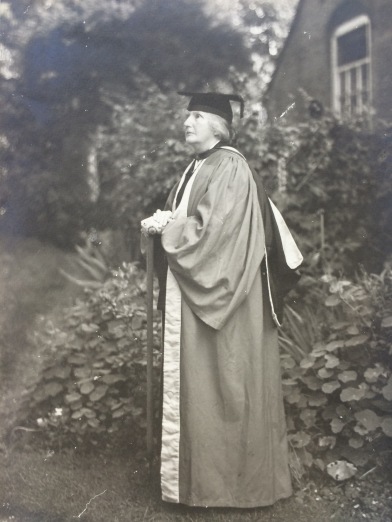 When Alfred Marshall, Professor of Political Economy at the University of Cambridge, died in 1924 after a long illness, his wife and fellow economist Mary Paley Marshall was 74. Her friends assumed that she would devote her remaining years to her beloved water-colour painting. But Mary had other ideas.

Alfred had left money and his large collection of economics books to the university, and it was agreed that a new library would be established in his honour (read more about the Marshall Library’s history here). Mary immediately donated £1,000 of her own money towards it, and arranged to pay a further £250 a year to maintain the library. Then she suggested that she herself should be employed there on an unpaid basis. After all, who knew the collection better? For years she and Alfred had welcomed students into their home on leafy Madingley Road to drink tea and discuss economics and the students would leave with armfuls of borrowed books.

So, at the age of 75, Mary began working as ‘Honorary Assistant Librarian’ at the Marshall Library. Every weekday morning, for almost twenty years, she would cycle from Madingley Road, then along the college Backs, to the library’s original premises on Downing Street. She was easily recognizable by her striking profile, colourful scarves and the ‘Pre-Raphaelite’ sandals she wore in all weathers.

Sitting at the library’s front desk, she would greet each student by name and offer suggestions about books and articles to consult. The historian G.M. Trevelyan said that ‘nothing escaped her clear, penetrating and truthful eye’. Mary’s favourite job was carefully cataloguing the books by author and subject on handwritten index cards in the special ‘brown boxes’, for many years the library’s main catalogue.

She only gave up her job at 87 when her doctor, fearful of her cycling in increasing Cambridge traffic, insisted on it. When she died two years later she left £10,000 to the University, ‘for the development and increased usefulness of the Marshall Library’.

Nowadays, the Marshall Library’s website has online induction sessions for new students, teaching them about how to navigate both the collection and the online cataloguing system. But when they visit the library, now housed in a modern building on Sidgwick Avenue, most freshers will still ask a librarian for advice. And as they walk up the stairs with their books, the students will see two portraits watching over them: Alfred on one side, and Mary on the other.

Mary Paley Marshall (1850-1944) was one of Cambridge’s earliest female students and the first to sit for the final year Tripos exams. She became Newnham College’s first resident lecturer in political economics, taught at Bristol and Oxford universities, and co-authored, with Alfred Marshall, The Economics of Industry (1879). After the couple moved back to Cambridge in 1885, Paley Marshall continued to teach at Newnham and Girton, and helped her husband to write his economics books. In 1927 she was awarded an honorary doctorate by Bristol University (pictured above) in recognition of the part she played in advancing women’s access to higher education.

Please reference as follows: Ann Kennedy Smith, ‘How to use a library’, The Ladies’ Dining Society, https://akennedysmith.wordpress.com/ (Accessed: day/month/year).

3 thoughts on “How to use a library”

Some of this. And some of that.

A lifetime of reading and book collecting leads me to share stories of literary life: books old and new which inspire and comfort me and the people I meet.