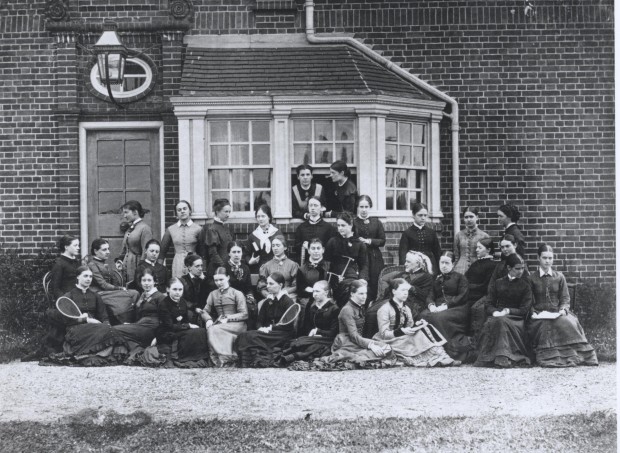 Newnham Hall students in 1878, Newnham College Archives PH/10/1 (Mary is fourth from left in back row, wearing a white shawl)

Mary Ward (née Martin) was born in Armagh, Northern Ireland on 6 June 1851, the third of a growing family of twelve children. Her father, a Congregationalist minister, found it hard to make ends meet, but Mary’s brothers were able to go to school thanks to scholarships for the sons of the clergy. This must have struck Mary as unjust, but she got a good education from her mother who taught her and her younger siblings and calmly ‘piloted the family ship’ (Lawson Dodd, 39) with a volume of Dante propped up against the mixing bowl and a baby on her lap.

The family moved to England, and when she was 15 Mary left home. She spent a year as a pupil-teacher in Hampstead, and from 16 worked full-time as a governess, teaching and supporting herself while her older brothers studied at Cambridge. But Henry and James did not forget their bright and hardworking sister. Lectures for women had begun at Cambridge, and her brother Henry Newell Martin, by then working as a biologist with Thomas Huxley, promised to support Mary’s studies there if she won the entrance scholarship. She did, and in 1876, ‘a delicately pretty woman of 25, but looking much younger’ (Lawson Dodd, 40), Mary became a student at Newnham Hall, later College.

Her fragile appearance belied her passionately political character. Her ‘quick Irish speech bubbled out when she was excited,’ her daughter observed years later. ‘Life was full of the urge of things to fight for’ (Lawson Dodd, 41). While a student at Newnham, Mary fought for women to have access to university education on equal terms to men, and to take Cambridge’s final examinations as a right, not a courtesy. She was the first woman to gain a first-class honours in moral sciences, albeit unofficially, as women would not be awarded Cambridge degrees for many years to come. But she and Newnham were able to celebrate when in 1881 the University Senate voted by 366 votes to 32 to open its examinations to women. Mary was appointed resident lecturer, and continued to teach and support women students at Newnham after she married and had children. She was a member of the Cambridge Ladies Dining Society 1890-1914.

(If her name sounds vaguely familiar, it might be because of her namesake, Mary Augusta Ward (née Arnold) who was born in Hobart, Tasmania, coincidentally also in June 1851. After moving to England she married an Oxford don and, as Mrs Humphry Ward, became England’s highest-earning novelist after her novel Robert Elsmere was published in 1888. She was also a social reformer who helped to organize the first women’s lectures at Oxford and later began the ‘play centres for children’ movement to enable working-class mothers to go out to work, a legacy that continues in the valuable work of the Mary Ward Centre in London today. But if the ‘Oxford’ Mary Ward, once so famous, is remembered at all today, it is less for her considerable achievements than as (whisper it) a traitor to her sex. In 1908 she became the leading spokesperson for the Women’s National Anti-Suffrage League and ‘the person who impeded women getting the vote for seven long years’, as the critic John Sutherland wrote in his article about her, ‘The suffragettes’ unlikeliest enemy’.)

Coincidentally, it was around this time that the (considerably less famous) Cambridge Mary Ward took up arms on behalf of women’s suffrage. She became Honorary Secretary for the Cambridge Women’s Suffrage Association, galvanising the movement with lively meetings held at her house, and in 1908 (as Mrs James Ward) she published her play Man and Woman: The Question of the Day. It was very popular with suffrage societies for the next few years, with the main character, Helen, converting a female anti-suffragist to the cause by telling her ‘Women may let politics alone, politics don’t let them alone’. Although the Cambridge Mary Ward disagreed with the militant tactics of the suffragettes, in 1913 she resigned her membership of the Liberal Party in protest against the government’s treatment of suffragist prisoners.

Still frail in appearance, and beginning to fail in health, Mary never lost her urge to fight for women’s rights. In July 1913, at the age of 62, she was one of the leaders of the group who marched from Cambridge to London as part of the huge countrywide pilgrimage of pro-women’s suffrage supporters, including many men. She also never lost her Irish accent, her self-deprecating humour, and her interest in others: ‘”now tell me”, she would begin, with shining blue eyes; and then she would listen, appreciatively, relishing all the details, and recounting her own experiences with gusto, all the more gaily if they were disastrous’ (Lawson Dodd, 46). 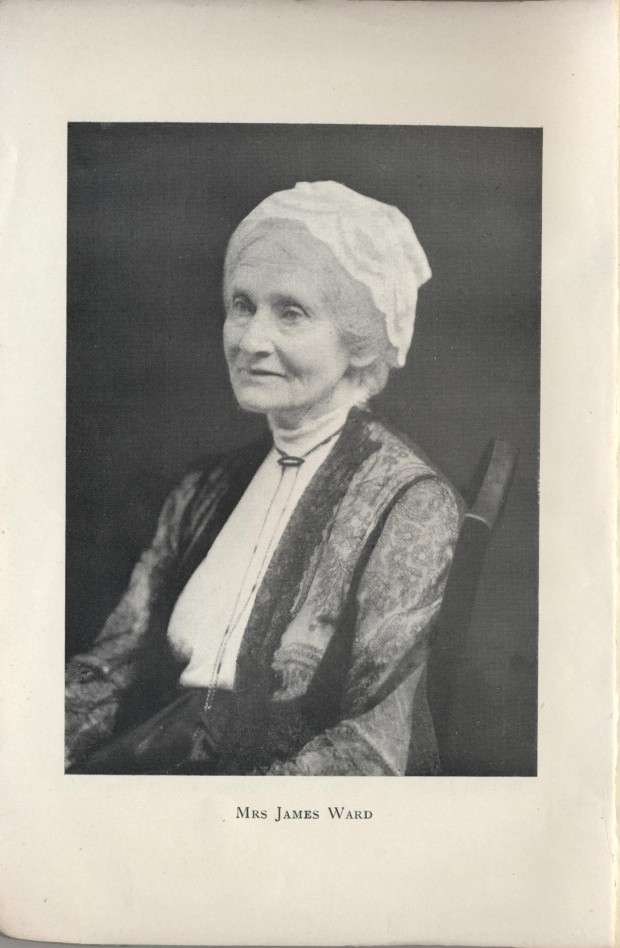 7 thoughts on “The other Mary Ward”

a collective project by historians for the public