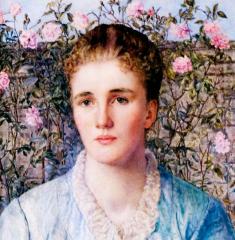 Oxford 1871-75:  ‘Nobody,’ said Ruskin, ‘will believe that the main virtue of Turner is in his drawing’. The Oxford professor and author of Modern Painters was discussing ‘Light and Shade’ in a public lecture on art on a Thursday afternoon in Oxford, 9 February 1871. He told his audience, packed into the Sheldonian theatre, that he was convinced that J.M.W. Turner’s genius as an artist lay in his skills as a draughtsman rather than as a colourist. One young woman in the audience who hung on Ruskin’s every word was twenty-year-old Louise von Glehn from London. She was visiting Oxford for the first time and passionate about art: Ruskin was, she told her friends, her prophet. It was ironic that at his lecture on the virtues of monochrome, Louise had chosen to wear a striking yellow scarf. It caught the eye of Mandell Creighton, a tall, art-loving 27-year-old don. He asked to be introduced to the ‘girl who has the courage to wear yellow’, and she was instantly struck by his self-confidence and brilliant, witty conversation. ‘How dull everyone else has seemed to me in comparison,’ she later wrote. Soon afterwards they became engaged. 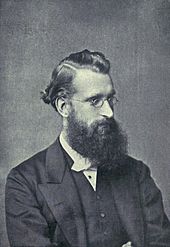 According to ancient university statutes at Oxford, fellows were not permitted to marry, but Merton College made an exception in Creighton’s case: they did not want to lose this gifted teacher and scholar who, unusually for an intellectual of that time, had recently taken religious orders. Louise and Mandell (or ‘Max’ as she always called him) married in January 1872 and settled in a modern villa in St Giles, Oxford, which they named ‘Middlemarch’ after George Eliot’s novel. They gave their artistic tastes free rein in their new home, decorating the drawing-room with Burne-Jones prints, old oak furniture, a blue carpet and the yellow wallpaper they both loved. Louise and Mandell adored each other with a passion, but from the beginning it was a stormy relationship. Charming and witty in public, he was frequently critical and demanding at home, and ‘not the sort of husband who overlooks one’s faults’, she told her sister three months after her wedding, adding that ‘nothing could be better for me.’ She was never afraid to take issue with him, although she always preferred it when they came to an agreement. Her friend Bertha Johnson painted her portrait at this time, looking soulful against a Morris-like trellis of roses, but Louise was no wistful pre-Raphaelite heroine. In contrast to Mandell, she had a brusque, direct manner that some people found rather alarming.

She would have loved the chance to study at university herself. Before moving to Oxford she had taken London University’s first higher examination for women, and passed with honours: ‘had circumstances permitted it,’ she wrote later, ‘I might have become a real grubbing student’. Circumstances did not permit it because London was an all-male university until 1878. Cambridge had just begun to accept its first women students, however, and Louise and a group of like-minded women, including her friends Mary Augusta Ward and Clara Pater, decided that Oxford University needed to catch up. In 1873 they helped to set up a committee to organize the first women’s lectures and classes at the university, and in 1877 this became the Association for the Higher Education of Women. It led to the founding of Oxford’s earliest women’s colleges, St Margaret’s Hall (1878) and Somerville (1879). 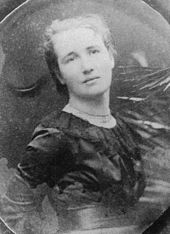 Cambridge 1884-91: From 1875 until 1884 the Creightons lived in Embleton, Northumberland where Mandell Creighton took up the post of country vicar and worked on the first volumes of his extensive papal history. Louise combined caring for, and home-educating, their six children with her own writing of a series of popular history books. In 1884 Mandell accepted the offer of the first professorship of ecclesiastical history at Cambridge, and the family and their servants decamped to a rented house on the edge of the city, where their seventh child was born. Louise was happy to be able to socialize with the new generation of university wives, and in her characteristically forthright way she decided that she would make particular friends with Kathleen Lyttelton. Kathleen and Louise had much in common: they were both published writers who were married to ambitious academic clergymen, and they shared a strong interest in social work. Their friendship became closer when they both became involved in establishing the National Union of Women Workers (now National Council of Women), a non-political organization aimed at supporting working women in their domestic lives. Louise became its first president.

She had stayed in touch with her Oxford friends Clara Pater, by now classics tutor at Somerville College (years later she privately taught Virginia Woolf) and Mary Ward, who as ‘Mrs Humphry Ward’ was achieving modest success as a writer. This all changed and Mary became famous when her novel about a doubting cleric, Robert Elsmere, was published in 1888; it was an immediate bestseller and Gladstone wrote a long review of it in the literary journal The Nineteenth Century. The journal’s canny editor J.T. Knowles, keen to boost circulation figures, suggested that Mary Ward could use her celebrity status to organize an anti-suffrage manifesto. She asked Louise for help, and together they gathered the signatures of 104 well-known women for a petition that was published in the June 1889 issue of The Nineteenth Century. The petition was scathingly attacked in the following issue by the influential suffragists Millicent Fawcett and Emilia Dilke, and in Cambridge the strongly pro-suffrage Kathleen Lyttelton was distressed by her friend’s anti-suffrage stance. Louise stayed firm, however, and in August The Nineteenth Century published her six-page ‘Rejoinder’, stating her belief that a wife was ‘purer, nobler, more unselfish’ than her husband and that giving the vote to women would ‘lower the ideal of womanhood among men’. She signed it ‘Louise Creighton’: it was her first step onto the national stage, and it made her famous. Later she regretted her involvement in the controversial manifesto, saying simply ‘I think this was a mistake on my part.’

The following year Louise and Kathleen asked a small group of their Cambridge friends to form a ladies’ dining and discussion club. It was so successful that they decided to meet twice a term, and continued to do so until 1914. The Creightons left Cambridge in 1891 when Mandell accepted a bishopric at Peterborough, but Louise never left the club; she travelled back to Cambridge for their meetings, or invited them to the bishop’s palace at Peterborough, and later Lambeth Palace. 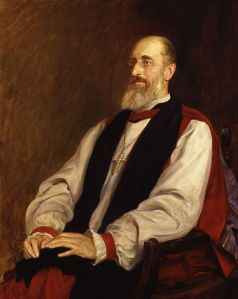 London 1904-6:  Mandell Creighton, Bishop of London, died age 57 in January 1901, just days before the death of Queen Victoria. Louise was overcome with grief at the loss of her husband, but pragmatic. She moved to a ‘grace and favour’ apartment at Hampton Court and set about writing her Life and Letters of Mandell Creighton, which was published in two volumes in 1904 and widely acclaimed as one of the best biographies of its time. Then there were several volumes of Mandell’s speeches and writings to edit and publish. It was as if everything she did was to establish his future reputation and ensure that this brilliant and complex man was understood.

At the 1906 conference of the National Union of Women Workers held at Tunbridge Wells, Louise stood on the platform and made an announcement. She told her audience that she had changed her mind about women’s suffrage, and from now on would support the parliamentary campaign for women to have the vote. Mary Ward was furious when she heard this, and tried to talk her friend round, but Louise was once again resolute. In 1908 Mary agreed to head the ‘Women’s National Anti-Suffrage League’. Her campaign helped to delay the vote for several more years, and ensured that Mrs Humphry Ward is today remembered less for her novels and significant contribution to women’s education and childcare provision, than for standing in the way of equal rights. Or (a worse fate for a woman who so loved controversy) simply forgotten, as John Sutherland has said.

Privately, Louise worried that people would think it was Mandell’s death that had allowed her to express her feminist opinions freely for the first time. Was there not some truth in this? In her unpublished memoir she considers the question as carefully as if Max had turned his penetrating eyes on her. ‘I certainly should not after he was a bishop or indeed at any time’ she wrote, ‘have taken up a line opposed to him in any public opinion… I do not think he was at all strongly opposed to female suffrage at any time.’ But she sounds hesitant, as if she was asking herself whether her wifely loyalty and love for Max had occasionally been in conflict with her own beliefs and saying what she thought. As Ruskin said, there was light and shade in everything. 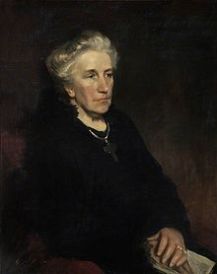 Louise continued to write, publishing history books, biographies and a treatise on venereal disease. She served on two Royal Commissions, gave lectures at the London School of Economics and as a moderate Christian feminist, worked hard to reconcile liberal and conservative factions in the Anglican Church. Her biographer noted: ‘In her later life she pondered the question of the priesthood of women. She recognized that her opposition to it was rooted in instinct and prejudice, and she could find no logical reason against it.’ In 1927 she moved back to Oxford and served on the governing body of Lady Margaret Hall for the rest of her life.