A study of Strachey reading, by Dora Carrington

Just over a hundred years ago, in 1918, Lytton Strachey’s Eminent Victorians was published and biography changed forever. To celebrate the centenary of this groundbreaking book, I decided last year to compile a list of 100 of my favourite biographies and memoirs that have been published since then, and post each one on Twitter as my ‘Life of the Day’, with the hashtag #lifeoftheday. My list is not in any particular order or organized by theme, but as I have now reached the halfway mark, here’s a selection of a few of them.

The first biography I chose was Virginia Woolf’s Flush: A Biography (Hogarth Press, 1933), an imaginative account of the life of Elizabeth Barrett Browning through the eyes of her mischievous little cocker spaniel. All her life Woolf experimented with different forms of biographical writing, but even before Flush was published she regretted it, believing it would prevent her from being taken seriously as a writer. Yet after her friend Sibyl Colefax praised it, Woolf said: “I’m so glad that you liked Flush. I think it shows great discrimination in you because it was all a matter of hints and shades, and practically no one has seen what I was after.”

One of the first biographies that made me want to write about ‘forgotten’ women was Ann Thwaite’s Emily Tennyson: The Poet’s Wife (Faber 1996). In her preface Thwaite wrote: “I have always been interested in the lives of nineteenth-century women who managed, in spite of the restrictions they suffered, to live full and fulfilling lives.” She showed that Emily Tennyson was musically gifted and independent-minded, something that biographers of her more famous husband had failed to notice.

Claire Tomalin’s The Invisible Woman: The Story of Nelly Ternan and Charles Dickens (Penguin, 2012) ‘is the story of someone who – almost – wasn’t there; who vanished into thin air,’ Tomalin writes. I included Frances Wilson’s The Ballad of Dorothy Wordsworth (Faber 2008) for its vivid opening pages (“I half dread that concentration of all tender feelings, past, present and future which will come upon me on the wedding morning”) that instantly reveal the passionate inner life of William Wordsworth’s sister. 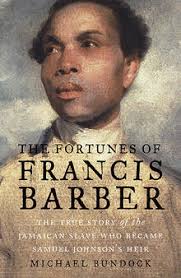 Not all overlooked lives are female: I love The Fortunes of Francis Barber by Michael Bundock (Yale, 2015) for its fascinating story of the “intimacy, possessiveness, exasperation and love” of the close friendship between a former child slave and Dr Samuel Johnson. My own blog celebrates friendship, so it’s not surprising that several of the biographies I chose also take this as their subject.

A Secret Sisterhood: The hidden friendships of Austen, Brontë, Eliot and Woolf (Aurum, 2018) by Emily Midorikawa and Emma Claire Sweeney showed how these writers’ friendships with other women underpinned their lives and writing, sustaining and challenging them to greater creativity. I wrote a review of it here. Michelle Dean’s Sharp: the women who made an art of having an opinion (Fleet, 2018) is another engaging group portrait, in this case of the connections between ten 20th-century female thinkers and writers.  Alethea Hayter’s A Sultry Month (Faber, 1965) is a pioneering biography that brilliantly evokes a summer of fierce heat and personal crises for a close-knit group of writers and artists in 1846 London. It’s a book that still has a huge impact.

The book that got me interested in writing about marriage is Parallel Lives: Five Victorian Marriages (Penguin, 1983) by Phyllis Rose. It’s an insightful, thought-provoking evocation of the troubled marriages of Dickens, Carlyle and Ruskin that’s a pleasure to read and Rose asks ‘if we managed to suppress marriage, what would we have left to tell?’ More recently, Daisy Hay wrote ‘a portrait of a marriage unobscured by mythology’ in her Mr and Mrs Disraeli (Chatto & Windus, 2015), which shows her biographer’s skills of ‘watching for alternative narratives, listening to things not said.’ I love Michael Holroyd’s explanation of how he ended up writing about the famous theatrical partnership of Ellen Terry and Henry Irving in A Strange Eventful History (2008): “it was impossible to write about Ellen without Irving elbowing his way in and trying to upstage her – and once that happened the rest of the families crowded in and I was in for the long haul.” (The Guardian, 2008).

Some of the best biographies remind us of the pitfalls of life writing. In Virginia Woolf (Vintage, 1997) Hermione Lee shook up biography traditions by reminding us in the opening chapter that “there is no such thing as an objective biography, particularly not in this case.” In his equally influential book, Footsteps: Adventures of a Romantic Biographer (Harper Perennial, 1985) Richard Holmes showed the pleasures of ‘footstepping’ your subject, visiting the places they went to and seeing what they saw. “If you are not in love with them you will not follow them – not very far, anyway,” he warns. Yet the besotted biographer is not necessarily a good thing, as far as his or her subject is concerned. ‘The biographer at work,’ wrote Janet Malcolm provocatively in The Silent Woman: Sylvia Plath & Ted Hughes (Granta, 1993) ‘is like the professional burglar, breaking into a house, rifling through certain drawers that he has good reason to think contain the jewelry and money, and triumphantly bearing his loot away.’

In her prize-winning Aristocrats (Chatto, 2004) Stella Tillyard offers a more positive view of why life-writing matters: ‘biography (especially biography that deals, as this one does, with romance and royalty) often gives intimacy without context, and history without biography offers context without the warmth of individual lives.’ Craig Brown also deals with romance and royalty in his witty and irreverent Ma’am Darling: 99 Glimpses of Princess Margaret (4th Estate, 2017). It was awarded the James Tait Black Memorial prize for Biography in 2018, and like Virginia Woolf’s Flush it’s a reminder to all biographers not to take themselves – or their subjects – too seriously.