It was a bright morning in late March 1875, and sunlight slanted into her bedroom. Caroline Jebb had woken early, thinking about the roll of carpet from Thomas Tapling’s in London that had been delivered to their new house the day before. She and her husband Richard, a classics don, would soon be moving into St Peter’s Terrace, a row of seven tall houses near the Fitzwilliam Museum in Cambridge. It was fashionable address, but the owners, Peterhouse College, had allowed the interiors to fall into disrepair and pear trees to colonise the back garden. Caroline advised Richard to refuse to sign the lease until the college agreed to take the garden in hand and redecorate the house from top to bottom.

Six months on, the work was almost finished, with Caroline supervising every step of the process, from the most flattering shade of grey on the drawing room walls to the culling of the pear trees. The carpet was the last thing to be fitted. It was a ‘tapestry Brussels’, not expensive at only two shillings eleven pence a yard, and certainly good enough for the upstairs rooms, she thought. She had ordered a hundred yards which was plenty for three bedrooms, but after ordering it she realized that she had forgotten about the dressing room. She told Mr Burnett, her upholsterer, that she was sure that if he cut it a certain way there would enough leftover strips to cover the dressing-room. He had shaken his head and said that she would need another ten yards at least. There was always waste with carpets like that, he told her, it was to be expected. His wife might be able to do something with the off-cuts, he added, as if he was doing Caroline a favour. He was coming to cut the carpet that day and would bring his cart.

Caroline had always prided herself on being careful with money, as she had to be, with an itinerant preacher for a father. The family had lived in several American states as she grew up, but only Nashville was as cold as a English winter, she told her sister Ellen. Caroline was good with figures, even though she had left her school in Philadelphia at fifteen; calculations came naturally to her. She decided that she would get to the house before Burnett and the other workmen got there and see for herself. As she let herself out of the front door onto their quiet Cambridge street, she thought about her husband Richard, who was spending his Easter vacation visiting his elderly parents in Ireland. He would not have liked her walking through the streets at six o’clock in the morning (or indeed any time), and would have insisted on ordering a carriage for her. The expense of such a thing was ridiculous.

Parker’s Piece stretched green and fresh into the distance. Delivery boys pushed heavy barrows across the paths, and a handful of young men were up early to play football before their working day began. Outside St Peter’s Terrace, the cherry trees were in glorious blossom and inside the house smelled of fresh paint and sawdust; the decorators had been hard at work. Gardeners too, Caroline noted, looking out of the landing window, pleased to see that a dozen rosebushes had been planted around the planned croquet lawn as she had instructed and the pear trees had been forced into retreat at the bottom of the garden.

She turned from the window and walked up to her bedroom. The carpet lay rolled in its wrappings of brown paper and strings, Mr Burnett’s tool-bag on the floor nearby. I shall just have a look at it, she thought, taking his large scissors out of the bag. 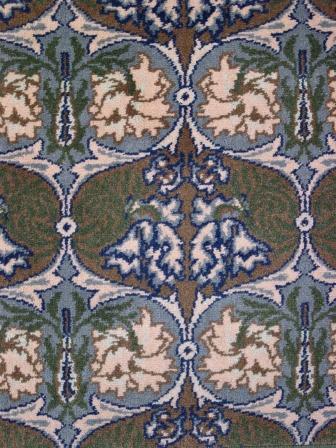 ‘I was very busy and very happy cutting off the lengths of carpet for my own room, when my upholsterer and factotum Mr Burnett came in, and caught me in the very act,’ she later wrote to her sister Ellen in Philadelphia. ‘He looked so shocked that I yielded my scissors and my position at once, and took on myself the harder work of putting my ideas into his head.’

Caroline was aware of how undignified she must have appeared, on her hands and knees cutting her way through carpet, with dust in her hair and smudges on her face. Whatever would Richard say? That this was not suitable work for a lady. He frequently reminded her that as an American she should take extra care in keeping up appearances in the highly traditional university town that was Cambridge.

Caroline listened politely, but suited herself. That evening she took off her street dress and instead of dressing for dinner as she did when Richard was at home, put on a loose jacket and warm woollen skirt and had her supper on a tray, sitting comfortably by the fire with her book. There was enough carpet to fit all the rooms, as long as it was cut the right way, as she knew there would be. ‘Burnett will never think so well of me again,’ she told Ellen. ‘Luckily, I don’t care.’

Information for this scene is based on Caroline’s letter to Ellen Dupuy, 21 March 1875 from the Lady Caroline Lane Reynolds Slemmer Jebb Papers held at the Sophia Smith Collection, Smith College, Northampton, Massachusetts.