The economist Mary Paley Marshall was the great-granddaughter of the eighteenth-century theologian and philosopher William Paley. She grew up in a rose-covered rectory in the village of Ufford in Northamptonshire, about forty miles north of Cambridge. Her father, the Reverend Thomas Paley, was a strict Evangelical clergyman whose powerful sermons shook the little church and baffled the congregation, as Mary wrote in her beautiful memoir What I Remember (see my recent blogpost here). Her mother Judith, by contrast, was ‘full of initiative and always bright and amusing’. Summers at the rectory were idyllic for Mary and her brother and sister, and as young children the three siblings spent many happy days together playing croquet and rounders in the garden and looking after their Shetland pony, rabbits and hens. Visitors came to stay for weeks at a time, and there were family outings to Scarborough and Hunstanton. But winters seemed dull and endless for Mary and her sister, especially after their brother was sent off to boarding school, as the muddy country roads around the rectory were impassable and there were few interesting people to see. Their bright German governess left when Mary was thirteen, and she and her sister were expected to fill their time with Sunday school teaching and keeping their mother company in visiting the sick.

Fortunately for them, their father had what was an unusual attitude to learning for the time. Reverend Paley did not see why his daughters’ education should stop in early teenagehood, or be limited to certain ‘ladylike’ subjects. ‘We had a father who took part in work and play and who was interested in electricity and photography’, Mary recalled, describing how he entertained the whole village occasionally with his scientific demonstrations. At home, after supper in the evenings, he read aloud everything from The Arabian Nights, Gulliver’s Travels and the Iliad to Shakespeare and Walter Scott, ‘those fireside bulwarks of the old-fashioned home evenings’ as F.M. (Flora) Mayor wrote in The Rector’s Daughter, her wonderful evocation of a similar Victorian upbringing published in 1924 (see below). Reverend Paley’s strong religious principles meant that there were limits to his tolerance, however. He disapproved of the novels of Charles Dickens and once threw his daughters’ dolls into the fire, because, as Mary wrote, ‘he said we were making them into idols and we never had any more.’ 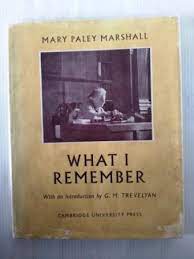 When her sister left home to get married, Mary’s daughterly duties seemed duller than ever. To give her something to do (and perhaps to dissuade her from marrying an unsuitable army officer she was engaged to) Reverend Paley encouraged her to enter for the Cambridge Higher Local Examination, first introduced in 1869 for women over eighteen who wished to become teachers. He set about coaching Mary in divinity and mathematics, and they studied Potts’ Euclid’s Elements of Geometry together. Not all of Mary’s studies were enjoyable. But although, as she recalled, she wept over the ‘Conic Sections’ paper in maths, she passed the examination with distinction in the summer of 1871. She was awarded a small scholarship to attend the University’s new scheme of Lectures for Women, on condition that she reside in Cambridge.

At the time, the idea that single women might live apart from their parents, and attend lectures was, as Mary said herself, ‘an outrageous proceeding’. Fortunately for her, her father knew and liked Anne Jemima Clough, whom Cambridge professor Henry Sidgwick had asked to look after the students at 74 Regent Street. Reverend Paley’s admiration for Miss Clough’s commitment to women’s higher education and his pride in his daughter’s achievements helped him to overcome his misgivings, so Mary Paley Marshall became one of Newnham’s ‘first five’ students.

In What I Remember Mary describes how she came to Cambridge for ‘general cultivation’ and only expected to stay for three terms. She chose to study Latin, History and Literature along with Logic, which Reverend Paley thought of as ‘such a safe subject’. But if he thought that his daughter would be unchanged by a Cambridge education he was mistaken. In her first term Mary obediently attended evangelical services and taught at St Giles’s Sunday school, as her father wished. But soon, she said, ‘Mill’s Inductive Logic and Ecce Homo and Herbert Spencer and the general tone of thought gradually undermined my old beliefs’, and with the encouragement of her lecturer, the economist Alfred Marshall (whom she later married), she changed subjects to study Moral Sciences (Political Economy, Politics and Philosophy). In 1874 Mary Paley was one of the first two women to take Cambridge University’s Moral Sciences Tripos, and  the following year she became Newnham College’s first residential woman lecturer in economics.

In 1924 Mary Paley Marshall co-founded Cambridge University’s Marshall Library  where she also worked as Honorary Librarian until she was 87. See my blogpost  ‘How to use a library’, here.

Sources: Rita McWilliams Tullberg, Women at Cambridge: a men’s university, though of a mixed type (1975); Mary Paley Marshall, What I Remember (1947); F.M. Mayor, The Rector’s Daughter (Virago Modern Classics, 1924, reissued by Virago in 1987). The Rector’s Daughter one of the ‘overlooked classics’ recommended by Susan Hill in The Novel Cure (2013). Flora Macdonald Mayor’s character, coincidentally also called Mary, is the unmarried 35-year-old daughter of elderly Canon Jocelyn, a clergyman in a small East Anglian village. The fictional Mary did not sit for Cambridge’s Higher Local Examination or marry, so there was no escape from her rector’s daughter’s duties: “On the whole she was happy. She did not question the destiny life brought her. People spoke pityingly of her, but she did not feel she required pity.” F.M. Mayor herself was a student at Newnham College, Cambridge in the 1890s, where she read History. It is possible that she met Mary Paley Marshall who gave supervisions while she was there. See also my 2021 blogpost here about Newnham student Winnie Seebohm’s (NC 1885) memories of ‘the marvellous Mrs Marshall’.

4 thoughts on “The education of Mary Paley Marshall”

A collective project by historians for the public