‘This is a circular book. It does not begin at the beginning and go on to the end; it is all going on at the same time, sticking out like the spokes of a wheel from the hub, which is me.’ Gwen Raverat, Period Piece: A Memoir of a Cambridge Childhood (1952)

Gwen Raverat’s account of growing up as a member of the extended Darwin clan in Victorian Cambridge has never been out of print since it was first published in 1952, and it has recently been reissued as a collector’s hardback by Slightly Foxed. ‘Humour, tenderness and affection are the keynotes of Period Piece,’ Hazel Woods writes in her introduction, ‘but there is a fierce and passionate undercurrent that tells you something about the artist Gwen became.’ Period Piece features punting, picnics on Grantchester Meadows and problems with corsets and bicycles, all illustrated with Raverat’s delightful drawings, often featuring the family’s put-upon dog. “My mother had the first lady’s tricycle in Cambridge. Our dog Sancho was horrified to think that anyone belonging to him would ride such an indecent thing”. It’s the perfect book to read in a garden on these sunny summer days.

I’ve been thinking about Period Piece again because tomorrow evening I’m giving a talk for Literature Cambridge (see their website here for details of courses in 2019 and 2020). My talk is part of the final evening of this year’s ‘Fictions of Home’ course, and will take place in Darwin College, which was founded as Cambridge’s first graduate college in 1964 and incorporates both of Gwen Raverat’s former riverside homes, Newnham Grange and the neighbouring Old Granary. I’ll be discussing three women who changed Cambridge: Anne Clough, Helen Gladstone and Ida Darwin. Ida’s later sister-in-law Maud was an American from Philadelphia who married George Darwin in 1884. They hired an architect and turned Newnham Grange into their family home. Their first child Gwen was born there in 1885. 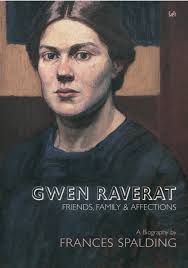 Recently I re-read Frances Spalding’s excellent biography of Gwen Raverat, revealing Gwen’s unhappiness as a child and her long struggle to become an artist. She found happiness when she enrolled as a student at the Slade, and made friends in the Bloomsbury set including Virginia Woolf (then Stephen) who came to Cambridge to visit. They sat in Newnham Grange’s garden together and Virginia smoked one of Gwen’s father’s cigars. In 1911 Gwen married Jacques Raverat, part of their ‘Neo-Pagan’ circle. Then the war came and their friend Rupert Brooke was killed in April 1915, on the same day as Gwen’s first cousin and childhood companion, Erasmus Darwin. There were other sadnesses, as during the war the ailing Jacques was diagnosed with multiple sclerosis. Gwen and Jacques had two daughters, probably through artificial insemination, and the family went to live in Vence, but his condition slowly worsened and he died there in 1925.

His death after years of pain triggered a deep depression in Gwen, but she kept on working and became recognized for her brilliance as as the first modern wood engraver. She and her two daughters returned to Cambridge in the 1930s, and during the Second World War Gwen Raverat spent four years drawing maps for the Naval Intelligence Division. In 1946 she moved back into the Old Granary next to her former home (both houses are now part of Darwin College), and her mother Maud died the following year. Living there again, admiring the reflections on the river, and sifting through old letters and diaries made Gwen decide to write about her own life, as she had always wanted to do – though she claimed to hate writing – and capture something of her past. She told her publisher that she saw the book ‘as a social document – to be a drawing of the world as I saw it when young, not at all as a picture of my own soul (though I suppose that gets in by mistake)’ (Spalding, 397).

The memoir is a circling back to the childhood that, aged 66, Gwen Raverat could still recall vividly, especially now that she was living again in the house by the river. Reading Period Piece today in the light of Raverat’s subsequent life shows just what a remarkable book it is. There are hints of unhappiness– her parents’ ‘hands that understood nothing’, but she observes them and growing up among Victorians with humour and forgiveness. Compared to the darker times to come, the sunny days of her Cambridge childhood were bright indeed. If you get the chance, do go into Darwin College’s gardens and stand on the riverbank where Virginia Woolf once daringly smoked. The view from there is lovely.

3 thoughts on “A sense of home: ‘Period Piece’”