I’m delighted that Carolyn Ferguson has contributed a second blogpost, linked to her Masters’ Wives quilt post last month. Her article below introduces us to one of the women who may have contributed to, and certainly influenced, this important Cambridge textile from 1892. Eglantyne Louisa ‘Tye’ Jebb (1845-1925) is less famous than her namesake daughter, the founder of Save the Children Eglantyne Jebb (1876-1928), but Carolyn Ferguson makes the case that her contribution to the Arts and Crafts movement should be better known.

Copper weathervane in the form of a cockerel from the chapel of Mill Road cemetery. Photograph credit: Peter Nixon, reproduced by kind permission of the Museum of Cambridge.

In August 1874 Caroline Slemmer and Richard Jebb went from Cambridge to Shropshire for their wedding. She described their arrival as ‘just like the novels we read of English life … none of the places in novels are near the station and no more was ours’[1]. There was a cart to take the boxes and a carriage with liveried coachman and footman to take the couple through miles of romantic countryside to an avenue of trees which lead to ‘The Lyth’, the home of Richard’s sister Eglantine Louisa and her husband Arthur Jebb. This then was Caroline’s introduction to the wider Jebb family. This post looks at the work of Eglantyne Louisa Jebb, Caroline’s sister-in-law, whose important influence in the world of Arts and Crafts largely goes unnoticed.

Eglantyne Louisa Jebb (1845-1925), known to her family as ‘Tye’ or ‘Tiny’ was an Irishwoman from Killiney who had married a distant cousin Arthur Trevor Jebb. She was no Victorian ‘angel in the house’, preferring to indulge her passions for poetry and painting and delegate the running of the household to her Newnham-educated and efficient sister-in-law, Louisa. ‘Tye’ would shock people by being unconventional and sit on the floor in front of the fire reading the paper or painting at the kitchen table amid the servants. So in this respect she would have been a bit like Caroline who was told off by her husband for informality early on in their marriage. The Jebb family were comfortably off but not rich – an old established family of gentleman farmers rather than landed gentry. Arthur at first practised at the Bar but from 1874 the family estate in Shropshire was his to run. Farming was not easy in the early years and Arthur was apt to complain about the laundry bills; one servant in particular had sent 70 handkerchiefs and as many aprons to the laundry in a 90 day period.

By the 1880s things were easier and their brood of six children, four daughters and two sons, were growing  ; Eglantyne was then able to champion more formally Women’s rights and Women’s work. Dreamy and artistic she might have been, but this did not prevent the emergence of the philanthropic ideals and missionary zeal that were common to many women in the late Victorian period. As a result of arranging to give a local lad lessons in woodcarving, she had realised the importance of maintaining local craft practices, giving people skills and marketing the produce of the labours. So in the last half of 1882 the Cottage Arts Association, Shropshire was born. Eglantyne appears to have been the founder and mainstay of this particular association although similar organisations were springing up round the country. She clearly found the experience fulfilling, for on Christmas Eve she confided to her diary that 1882 had been ‘the most wonderful year of my life. A lifetime of experience crowded into six months’. A few years later, in 1885, Cottage Arts moved under the umbrella of the Home Arts and Industries Association (HAIA) which promoted historical home arts and crafts throughout England, Scotland and Ireland until the advent of WW1. Eglantyne is credited with being one of the founders of this nationwide network of craft classes and organisations along with Mary Seton Watts. She publicised the Association in The Magazine of Art (1885) and the first volume of Woman’s World (1888) .[2] Interestingly this latter article appeared under Oscar Wilde’s editorial reign; he too was a champion of the Arts and Crafts movement. Little did Eglantyne know how influential her initial work in helping to promote classes in rural crafts was to become; by 1890 there were more than 450 classes running throughout the UK. The Association that she helped to begin was a forerunner to the Arts and Crafts movement run by William Morris.

In 1904 The Art Workers Quarterly described HAIA as ‘ a society for teaching the working classes handicrafts such as wood carving, inlaying, metal repoussé , basket weaving, leather work, book binding, and for encouraging these and others such as lace, embroidery, spinning, weaving, pottery etc, by means of an annual exhibition’; the first exhibition took place in 1885 and it proved so popular that the Royal Albert Hall was used as a venue from 1888. It is not clear where the initial ‘craft’ emphasis lay, as the legacy seems largely to be objects made from wood and metal, but the 1880s was a fertile time for ladies of a certain class to get involved in philanthropy and needlework organisations. An 1883 list of work societies (to promote needlework, sell work and give jobs to the distressed) by ‘Dorinda’  quotes 31 such societies round the UK[3]. There are obvious complications with this type of model for as Janice Helland  says ‘it revolves around the troubled relationship between philanthropy and its lower-class subjects, the complicated nature of beneficence, and commonly held opinions about the differences between the Arts and Crafts Movement and home arts’.[4] There seem to have been a large number of ‘ do-gooders’ among the leaders (rather than practising artists/craftswomen) and this may well have been why Eglantyne stepped back from active involvement. Her role in the Association was comparatively short lived as family pressures made her withdraw publicly in 1886 . From accounts ‘Tye’ seemed to have suffered nervous exhaustion but it could just have been that the nationwide craft was just too complicated for her to continue. She was though involved in the important craft exhibitions of 1885 and 1886. No records of these exhibitions have been found but a contemporaneous article on the 1900 exhibition at the Royal Albert Hall is critical of the carving, metal work and furniture but extols the virtues of the hand weaving and stitched items. It is unclear whether these crafts were exhibited from Tye’s classes.

It is however pertinent that the work of women is applauded, as many of the blocks of the Masters’ Wives quilt seem to have Arts and Crafts leanings. We do not know if this particular quilt was Tye’s idea, as the precise paths which give rise to embroidered signature quilts are unknown. I like to think that the still unknown ‘EJ’ was her monogram (see red flower block above, bottom right) and that in December 1891 her Cambridge sister-in-law Caroline Jebb might have asked for her assistance, knowing how talented and enthusiastic craftswoman Tye was. There were also further Cambridge connections as an HAIA metal work class, the Newton Class, was being run in Cambridge the city by John Williams (the ‘Copper weathervane in the form of a cockerel’, pictured above, and held in the Museum of Cambridge, is typical of this style). It is known that the class regularly featured at the HAIA exhibitions; and in a review of 1896 the Studio wrote: ‘The Newton (Cambridge) metal work included a fine panel of peacocks, part of a scheme for a complete decoration of a fireplace.[5] In 1901 Tye and her daughter Eglantyne moved to Cambridge to be near her brother Richard and his wife Caroline. By that time Tye was a widow and the children were largely off her hands; in time all four daughters were to become significant in their own right. Eglantyne and Dorothy co-founded the Save the Children Fund in 1919, Emily (Em) her eldest daughter was involved in Irish independence and wrote books, while Louisa (Lill) became the founder of the first Women’s Land Army in WW1.[6]

However we must not forget the achievements of Eglantyne Louisa ‘Tye’ Jebb, their mother. She was certainly an accomplished teacher, organiser, philanthropist, artist and likely to have been a creative sewer too! 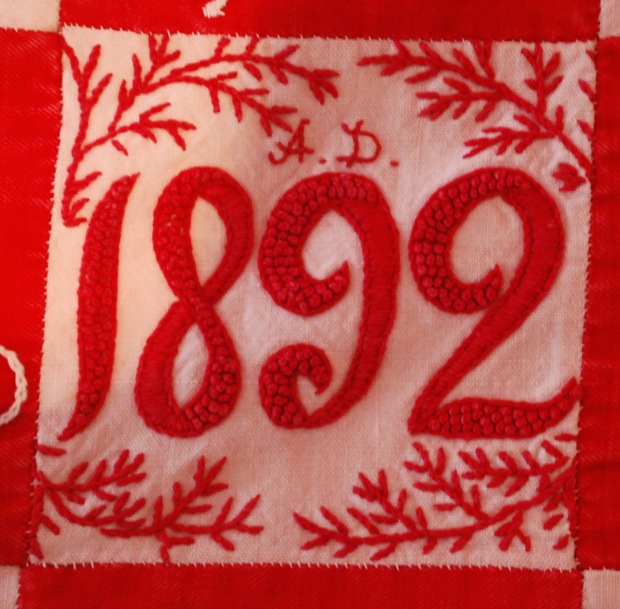 ‘Copper weathervane in the form of a cockerel’, photographed by Peter Nixon, reproduced by kind permission of the Museum of Cambridge. https://www.museumofcambridge.org.uk/